When the Partnership began its collaboration with Bandung in 2017, 37% of city residents between the ages of 16 and 49 considered themselves to be smokers. More than a third of city smokers reported smoking for more than 10 years, and nine out of every ten smokers did so as a regular social activity. Smoking rates in the greater West Java province are some of the highest in Indonesia.

The new smoke-free law directly addresses these challenges. Health facilities, schools, public transportation and workplaces across the city will be free from tobacco and secondhand smoke. Enforcement will begin a year after socializing the new law.

In the meantime, any citizen in Bandung can identify a location and record incidences of smoking through a simple mobile app developed by the city. This will help ensure business owners maintain smoke-free environments. As the capital of West Java and the fifth largest metropolis in Indonesia, a smoke-free Bandung will set a significant example across the region, and hopefully help turn the tide of tobacco addiction.

In 2016, the city of Bandung in West Java, Indonesia, was facing a serious health threat: smoking rates in the province were some of the highest in the country. Although Indonesia has a national tobacco control law, in order for it to be effective, there is significant pressure for local leaders to tailor and enforce tobacco control policy and initiatives within their cities. This created an opportunity for action—and Bandung rose to the challenge. 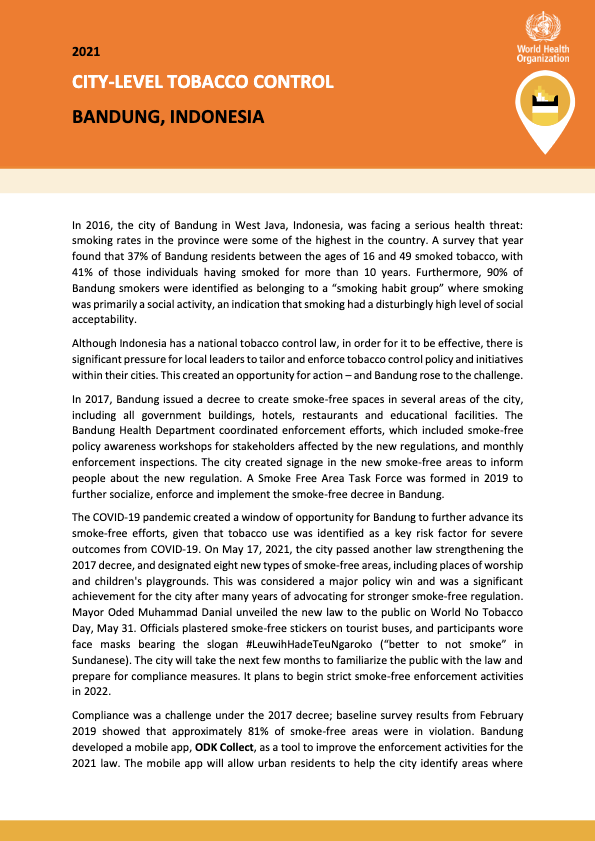