Through the Partnership, Lusaka began a pilot project in 2018, to improve roads around two public schools where children were at an elevated risk of traffic injury. The city engaged the Ministries of Education and Transport and other stakeholders to gain support for infrastructure improvements aimed at reducing speeds.

The city completed the first set of infrastructure improvements in September 2018. The new road design—including sidewalks, speed bumps, bollards, crosswalks, rumble strips and relocated school gates—forces vehicles to slow down and provides safe walking routes for schoolchildren. Average vehicle speeds dropped to 18 km/h in the school zones after the intervention.

An expansion of the project sought to build on these gains through road safety education targeting at least 6,000 children. The implementation of road safety infrastructure at an additional two high risk schools was completed in March 2021.

It is estimated that more than 70% of school-age children in Zambia go to school by foot daily. In 2017, Lusaka joined the Partnership for Healthy Cities to focus on road safety. A number of pilot projects introduced important infrastructure improvements around schools. Building upon success in reducing speeds in Lusaka's school zones, 30 km per hour limits became regulation on urban roads across Zambia. 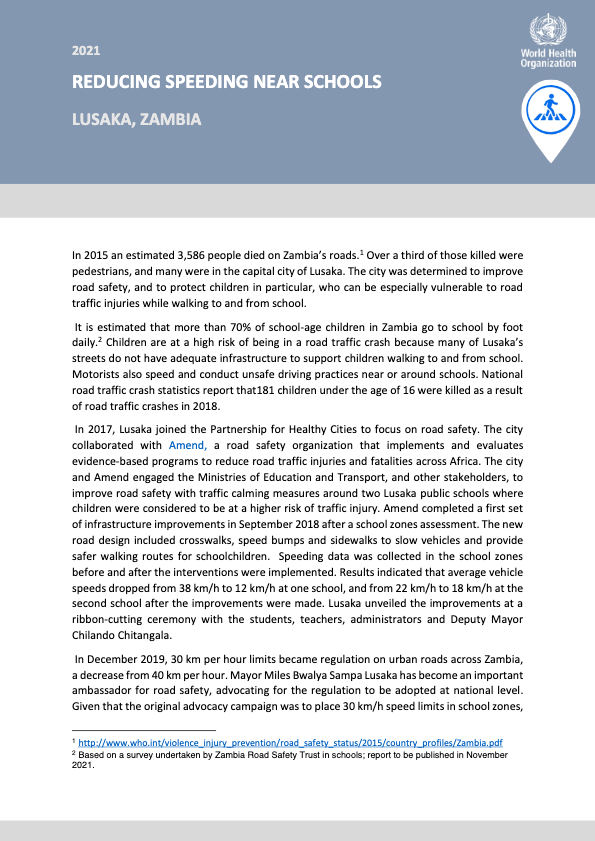